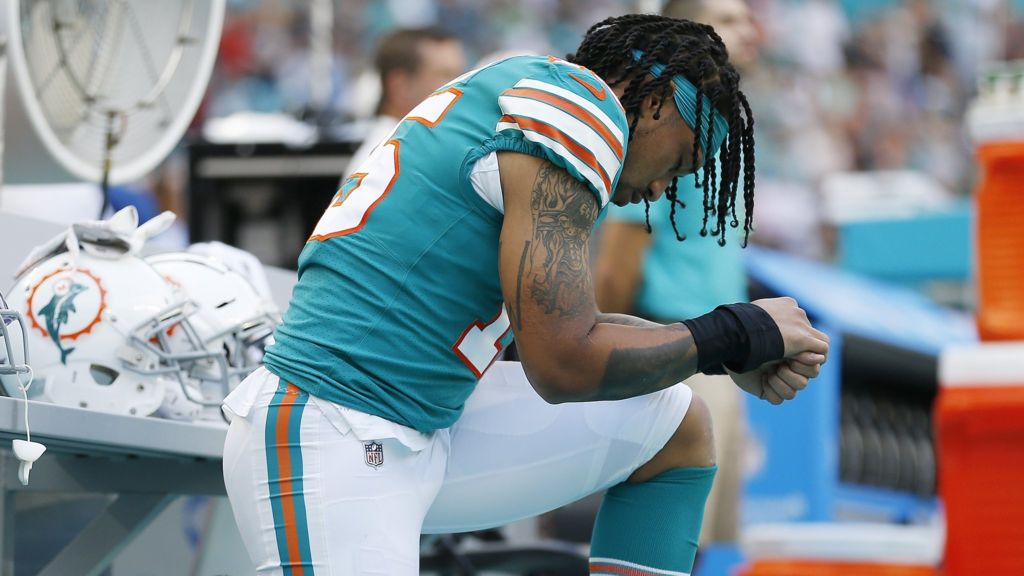 United States president Donald Trump says he will not watch the NFL or the US Soccer sides if players do not stand for the national anthem.

The NFL said last week its players should be allowed to protest during the anthem, adding that it was “wrong for not listening” to players earlier.

US Soccer overturned a ban on players kneeling during the anthem on Thursday.

The practice was started by former NFL star Colin Kaepernick in 2016 to highlight racial inequality.

Trump has opposed kneeling during the anthem and has repeatedly called on NFL players who do so to be sacked or banned.

Republican congressman Matt Gaetz criticised US Soccer’s decision on social media, and Trump responded to a news story of Gaetz’s view by saying: “I won’t be watching much any more.”

In a follow-up post on social media, Trump added: “And it looks like the NFL is heading in that direction also, but not with me watching.”

The U-turns by the NFL and US Soccer came amid ongoing protests following the death of George Floyd, an unarmed African American man who died in police custody in Minneapolis after a white officer knelt on his neck for almost nine minutes.

US Soccer introduced the ban in 2016 after women’s star Megan Rapinoe took a knee in solidarity with former San Francisco 49ers quarterback Kaepernick. It now says its previous stance was “wrong”.

The NFL tried to ban kneeling during the anthem in May 2018 and introduced a new policy with teams fined if players failed to stand, but put the policy on hold two months later.

Following Floyd’s death, NFL stars called on the league to condemn racism and commissioner Roger Goodell responded by saying the NFL had made mistakes and will now encourage players to speak out.

Trump questioned Goodell’s decision to change the NFL’s stance on kneeling, saying the act would be “disrespecting our country and our flag”.

Kaepernick has not played since becoming a free agent in 2017 and filed a grievance against NFL owners that year, believing they were conspiring not to hire him because of the kneeling protest.

The two sides resolved the grievance under a confidential agreement in February 2019.

Cleveland Browns quarterback Baker Mayfield has said he plans to kneel during the national anthem in support of protests against racial injustice and police brutality.

In a post on social media, the 25-year-old said: “If I lose fans, that’s OK. I’ve always spoken my mind. And that’s from the heart.”

Meanwhile, JJ Watt responded on Twitter to a user who said they were “pretty sure” the 31-year-old Houston Texans defensive end would not kneel by saying: “Don’t speak for me.

“If you still think it’s about disrespecting the flag or our military, you clearly haven’t been listening.”