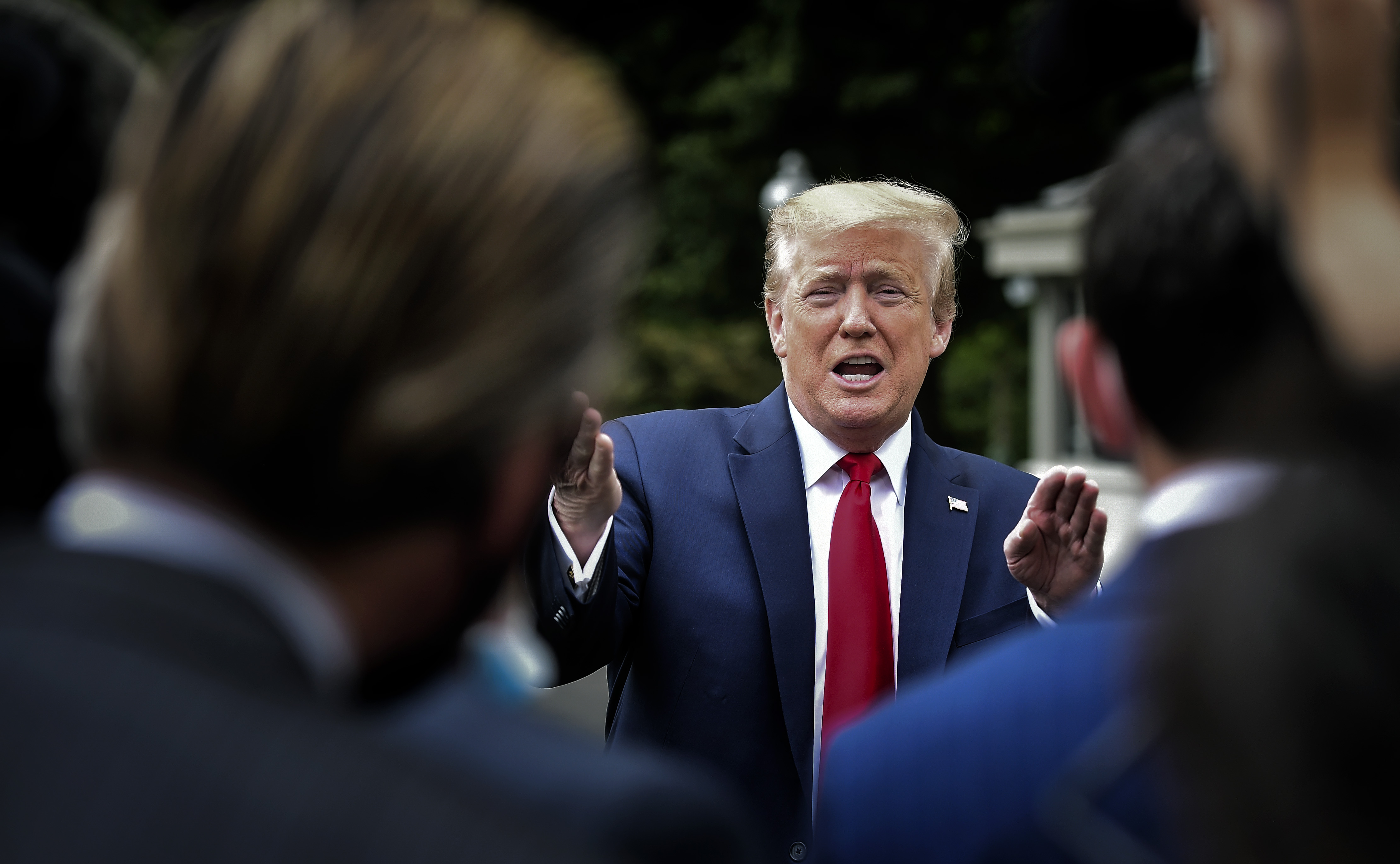 President Trump and the White House on Tuesday continued to promote a baseless conspiracy theory about a woman’s 2001 death, ignoring her grieving widower’s plea for peace and putting renewed pressure on social media companies about the president’s toxic use of their platforms.

“We are deeply sorry about the pain these statements, and the attention they are drawing, are causing the family,” Twitter said in a statement Tuesday. “We’ve been working to expand existing product features and policies so we can more effectively address things like this going forward, and we hope to have those ­changes in place shortly.”Later Tuesday, Twitter for the first time added labels to two Trump tweets that included misinformation about voter fraud, directing the president’s 80 million followers to “Get the facts” about the president’s false claims. The company did not take similar action against Trump’s tweets about Klausutis’s death.

Tuesday’s events reflected the pressure on Twitter and other social media companies to take responsibility for the false and misleading content they allow users to publish — a politically dicey proposition when one of the most prominent purveyors of such material is the president of the United States. Twitter, in resisting Klausutis’s request and doing nothing about the president’s tweets about the death of his wife, effectively signaled it was not applying the same standards to Trump that it does to average users — even as it puts a fact-checking label on his tweets, the first time the company has done so for a world leader.

Trump lashed out about the fact-checks Tuesday evening on Twitter, accusing the company of stifling free speech and interfering in the upcoming presidential election.

Trump and his allies often complain that social media companies have an anti-conservative bias, putting political pressure on tech giants that are already facing scrutiny in Washington in areas such as antitrust.

Trump threatened earlier this month to take unspecified actions against tech companies, claiming without evidence that they are breaking the law.

“The Radical Left is in total command & control of Facebook, Instagram, Twitter and Google,” Trump tweeted on May 16. “The Administration is working to remedy this illegal situation. Stay tuned, and send names & events.”

The Wall Street Journal later reported that the White House is considering establishing a panel to review complaints of bias against conservatives.

Neither Trump nor his aides expressed remorse Tuesday about the president dragging Klausutis into his feud with Scarborough, despite her husband’s plea.

“I’m asking you to intervene in this instance because the President of the United States has taken something that does not belong him — the memory of my dead wife and perverted it for perceived political gain,” Timothy Klausutis wrote last week in a letter to Twitter chief executive Jack Dorsey. “My wife deserves better.”

“When things are patently not true, they should say so,” he said during an interview with CNN.

Trump continued pushing the debunked murder charge, and the White House press secretary and the Trump campaign joined the fray Tuesday to amplify the allegation. Online, Trump supporters set themselves on a mission to defend the president and validate his accusation.

Scarborough, a former congressman, is one of the dozens of critics Trump has taken to Twitter to accuse of crimes. Trump’s online stream of baseless allegations, misinformation, and pseudoscience has intensified in recent weeks as the coronavirus pandemic death count has risen, sparking renewed calls for social media platforms to take action.

While the president’s accusations can be seen as an attempt to distract from the Trump administration’s handling of the pandemic, they also misuse the presidential bully pulpit at a time when it is sorely needed for public safety, said Max Skidmore, a political science professor at the University of Missouri at Kansas City and the author of a book on presidential responses to pandemics.

“He has no concern of whether what he’s saying true — only whether it works” politically, he said. “It’s outrageous.”

Social media platforms have grappled with how to handle Trump’s incendiary approach to public discourse.

On many occasions, Trump’s posts appeared to have crossed the line of social media company policies, but the companies have largely steered clear of censoring his commentary. Decisions to leave up Trump’s comments have sparked criticism that the firms are coming up with arbitrary policies on the fly.

Twitter, Facebook, and YouTube have long-held posts from world leaders to a different standard because they considered them “newsworthy.” That so-called “newsworthiness exemption” — in which the company allows content by public figures that break its policies to stay online — has repeatedly come under fire during the Trump presidency.

In 2018, Dorsey said he was reconsidering Twitter’s exception for political figures, acknowledging that the speech of powerful people can sometimes cause greater harm than everyday citizens and that perhaps they should be held to a higher standard rather than a lower one.

Last year, The Washington Post first reported that Twitter planned to start labeling tweets from world leaders that violate its policies but that remain on its site because of their news value.

The company unveiled its first such warning labels on Trump’s tweets on Tuesday, adding fact-checks to two of his posts alleging widespread voter fraud.

During the pandemic, Twitter and other technology companies have said they will act more aggressively than ever before to combat misinformation. Twitter revised its terms of service to say that it would remove posts by anyone, even world leaders if such posts went “against guidance from authoritative sources of global and public health information.”

For the first time, Twitter removed tweets by Brazilian President Jair Bolsonaro and Venezuelan President Nicolás Maduro, arguing that their March comments about breaking social distancing orders and touting false cures had such potential for harm that they warranted action beyond labeling. The shift marked a significant reversal for a company that had previously taken a hands-off approach to misinformation.

In May, Twitter rolled out a new policy saying that it would label or provide warning messages about coronavirus-related misinformation, even when that information did not directly contradict health authorities or Twitter’s own policies. The company said it may expand the labels to other issue areas, such as other types of health-related hoaxes or other situations where there is a risk of harm. Tuesday’s move to label Trump’s tweets was the first extension of that policy.

Throughout the day Tuesday, Twitter executives debated whether to apply its label to Trump’s statements about the widower’s wife and if so, how to classify the statement under the companies’ current policies, according to a person familiar with the discussions who spoke on the condition of anonymity to describe the private deliberations. They debated whether the tweet constituted misinformation that has the potential to cause harm, or is a form of harassment, said the person, who was not authorized to speak publicly about ongoing deliberations.

On Tuesday morning, Trump went on Twitter again to advocate the “opening of a Cold Case against Psycho Joe Scarborough,” which he said was “not a Donald Trump original thought.”

“So many unanswered & obvious questions, but I won’t bring them up now!” Trump added. “Law enforcement eventually will?”

With no evidence, Trump has continued to push a conspiracy theory that Scarborough, while a member of Congress, had an affair with his married staffer and that he may have killed her — a theory that has been debunked by news organizations including The Washington Post.

Authorities determined that Lori Klausutis suffered an abnormal heart rhythm and died after collapsing and striking her head. She was discovered in Scarborough’s office in Fort Walton Beach, on her back with her head near a desk, according to a 2001 police report. Trump has also alleged Scarborough decided to retire after her death despite publicly announcing his decision almost two months earlier.

In his letter to Dorsey, which was first reported in an opinion piece in the New York Times, Timothy Klausutis argued that Trump’s tweets violate Twitter’s community rules and terms of service.

“An ordinary user like me would be banished from the platform for such a tweet but I am only asking that these tweets be removed,” he wrote.

Scarborough, who was 900 miles away in Washington on the day Klausutis died, and his MSNBC co-host and wife, Mika Brzezinski, have both expressed outrage on the air in recent days — saying that Trump’s false accusations were most hurtful to Klausutis’s family. Brzezinski called Trump a “cruel, sick, disgusting person” and said he was using the episode to distract from the coronavirus pandemic.

Trump has repeated his baseless accusations about Scarborough on several occasions in recent weeks. Among the tweets cited in Klausutis’s letter in one from May 12.

“Did he get away with murder?” Trump asked of Scarborough. “Some people think so. Why did he leave Congress so quietly and quickly? Isn’t it obvious? What’s happening now? A total nut job!”

Asked why Trump is making baseless accusations, McEnany echoed Trump’s tweets indicating that the president was not the one who came up with the charge.

“I would note that the president said this morning that this is not an original Trump thought — and it is not,” she said, before referring reporters to a 2003 clip of radio host Don Imus joking about killing an intern during an interview with Scarborough. “That was, I’m sure, pretty hurtful to Lori’s family. And Joe Scarborough himself brought this us up with Don Imus.”

Brzezinski took to Twitter to accuse McEnany of lying, saying it was Imus who made the “callous joke,” while Scarborough tried to move on.

“No lies can cover up the hatefulness of Donald Trump,” she wrote.

Trump’s campaign also highlighted the clip from Imus’s show, using one of its Twitter accounts to post “#OPENJOECOLDCASE.”

One Republican congressman, Adam Kinzinger (R-Ill.), urged Trump to “stop creating paranoia,” adding that the divisive political strategy “will destroy us.” But most Republican lawmakers said nothing, highlighting their allegiance to a president who will appear at the top of the ballot alongside many of them in less than six months, Skidmore said.

“I would expect them to do nothing unless there is some indication that he is losing the support of his base,” said Skidmore. “Because his base is their base.”

Cat Zakrzewski and Craig Pittman contributed to this report.

Trump is refusing to unveil Obama’s portrait at the White House, breaking a 40-year tradition