Donald Trump has claimed a 75-year-old man who was hospitalized when police shoved him to the ground at a protest in Buffalo could be “an antifa provocateur” and suggested the incident “could be a set-up”.

Two Buffalo police officers were charged with assault after video showed them pushing Martin Gugino, a slightly built septuagenarian and longtime peace activist, with enough force that he violently struck his head on the sidewalk.

Gugino was still in hospital on Monday, in a serious but stable condition.

The incident has been held up as an example of aggressive policing at George Floyd protests across the country and has triggered outrage across the US and overseas.

Trump, however, claimed – without offering any evidence – that Gugino may have been attempting to infiltrate police scanners. The president also seemed to suggest Gugino had exaggerated the force used by police.

“Buffalo protester shoved by Police could be an ANTIFA provocateur,” Trump said on Twitter.

“75 year old Martin Gugino was pushed away after appearing to scan police communications in order to black out the equipment. I watched, he fell harder than was pushed. Was aiming scanner. Could be a set up?”

Trump also tagged One America News Network, a far-right conservative news network, in the tweet. Shortly before Trump’s post, OANN ran a segment which made near identical claims to Trump.

The Conservative Treehouse, which is among the news sites listed in FactCheck.org’s “misinformation directory”, claimed over the weekend that Gugino “was attempting to capture the radio communications signature” when he was shoved to the ground by the police.

During the 2016 presidential election the Conservative Treehouse peddled the conspiracy theory that Hillary Clinton might have cancer. It has also spread conspiracy theories about student David Hogg, who survived the Parkland school shooting and has become a prominent gun control activist.

The two Buffalo officers who pushed Gugino were charged with second-degree assault. All 57 members of Buffalo police’s emergency response team resigned from the team in an apparent show of support for their two colleagues.

Trump announced he would designate antifa – the term stands for anti-fascist – as a terrorist group at the end of May. Experts said the proposal is unworkable, and have said there is no actual antifa organization to be defined in such terms. 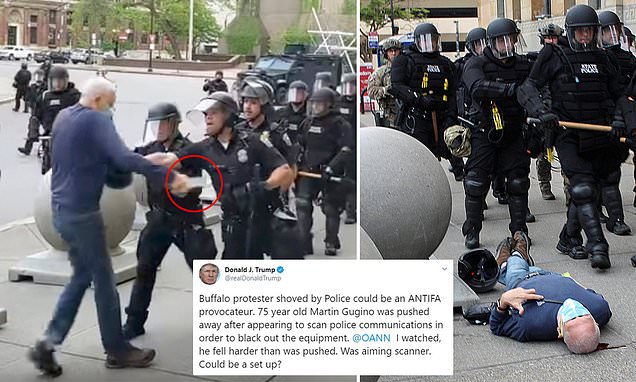 In reality, antifa relates to a broad spectrum of leftwing groups which are opposed to fascism and the far right.

Trump has often embraced conspiracy theories, most notoriously his pushing of “birtherism” – the completely false and racist theory that former president Barack Obama was not born in the US.